Up until the 1870’s, the seat of power in Connecticut was a single governing body, the State General Assembly, which met annually in either New Haven or Hartford. As the state grew, it became clear that a single, permanent home for the state legislature needed to be established.

After a feverous debate, it was decided that Hartford would serve as the new state capitol. In 1871, the news of the proposed capitol building was announced and several architects submitted plans for the new space. It was the work of Richard Mitchell Upjohn which was ultimately selected by the planning committee.

The son of famed American Gothic Revival architect Richard Upjohn, R. M. Upjohn was officially appointed “Architect of the State House.” Ground was broken in 1872 and work was completed in 1878. Officially accepted by the Board of Capitol Commissioners in 1880, the Capitol as it stands today is a testament to the architectural vision Upjohn had.

A Unique Combination of Architectural Styles 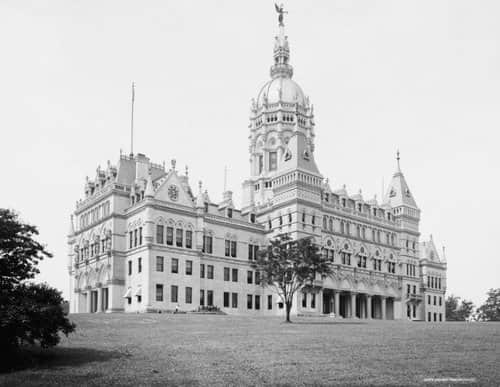 The exterior of the capitol building is distinctly crafted in the Second Empire style, replete with mansard roofs, metal cresting and dormers— hallmark characteristics associated with this movement. Contrasting the Second Empire style of the exterior is the striking Victorian Gothic interior. Embellished by William McPherson, the interior is decorated in the High Victorian Gothic Style, intricately adorned with complex diaper and running patterns and color pallets.

While the architectural motifs were established by R. M. Upjohn, the interior decorations, including stained glass, marble floors, stencil patterns, colors and carpets, were all designed and completed by McPherson. The level of collaboration between R. M. Upjohn and McPherson remains a mystery, but McPherson’s background training as a designer would have apprised him of Owen Jones’s proposition that “the decorative arts arise from and should properly be attendant upon architecture.”

While McPherson served as the principle figure overseeing the completion of the interior, other firms were contracted to complete various specialties throughout the building, such as the highly regarded Pottier & Stymus, who received the contract to complete the furniture and woodcarvings. 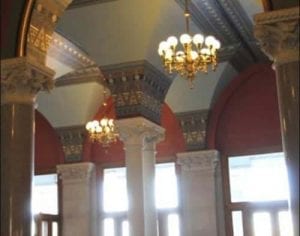 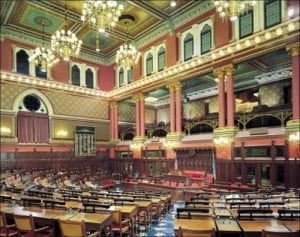 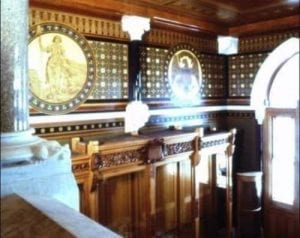 The designs seen within the Connecticut Capitol Building can best be described as the highest expression of the Aesthetic Movement Design. Characterized by a strictly tertiary color pallet and symmetrical design layout, a two-dimensional flat decoration scheme pervades. Highly stylized flower-and-leaf motifs, often outlined in black to remove any possibility of a third dimension, are seen throughout along with Moorish and Far East influences.

What makes the building remarkable is in part the extent and intricacy of decoration, but perhaps most remarkable is the consistency of the decoration motifs throughout the building. As generations come and go and the present en vogue style changes, impressions are left throughout a space, changing and altering its makeup. Free of such changes, the capitol building remains a pure homage to the Aesthetic movement.

Though the interior and exterior remain distinctly different styles, McPherson echoed motifs from Upjohn’s plans, maintaining the respectful relationship between architecture and design. Notes of Upjohn’s work are echoed throughout the interior spaces and can be seen across materials, including marble, paint, and glass work.

John Canning & Co. was brought in during the 1980’s at the request of the state of Connecticut appointed architect Dominic Cimino to help provide insights into the condition of the building and to ultimately design and execute conservation and restoration work in multiple spaces.

The House of Representatives

Perhaps of all the spaces John Canning & Co. worked on in the Capitol building, none was transformed quite as dramatically as the House of Representatives. After careful assessment of the various artistic aspects within the chamber, it became evident that a total floor-to-ceiling restoration needed to be conducted. 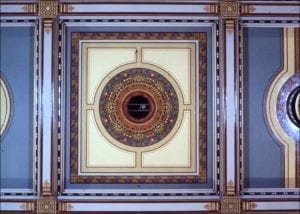 Over the decades, numerous changes, alterations and renovations were made to the space, each greatly altering the historic vision, making it a challenge to restore the room to its original condition. Before restoration could begin, careful analysis was done on a variety of surfaces throughout the space to help provide clues about what the room would have looked like when it was initially completed in the late 1880s.

A number of chemical and mechanical tests were employed to help provide information pertaining to original colors used, chemical composition of paints, and the current state of preservation of materials within the House. Working with Professor Frank Matero of Columbia University, microscopy analysis identified 32 original colors which were custom color matched for the restoration. This attention to detail provided the historical integrity the preservation committee was seeking. 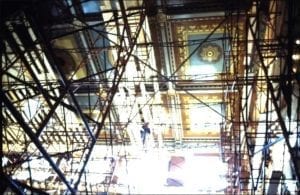 Over time, careless application of paint masked not only the original color scheme of the space, but also the intricacy in the plaster work. Exposures carefully removed each layer of paint and uncovered the original design—no small feat! While the ceiling has about 90% of the original stencil patterns, during the restoration additional highlighting of the stencil borders further accentuated the designs and enhance visibility from the chamber floor.

Extensive work was needed to restore the walls of the House Chamber back to its original condition. During the late 1950s the lower portion of the chamber walls were covered in acoustic tiles. Over the years, these tiles were painted over many times, eliminating any noise-dampening properties they may have possessed.

When the decision was made to have the acoustic tiles removed, the walls incurred damage due to a strong epoxy applied during the installation process. The epoxy was applied in four spots on the perimeter of the tiles to affix them to the wall. When the tiles were removed, the wall (and stencil pattern) came with it. The resulting damage meant that the walls would need to be resurfaced—a time consuming process yet rewarding process.

Identifying the original stencil decorations was a complex process. The acoustic tiles covered almost the entirety of the lower walls of the House. However, some exploratory work helped uncover glimpses of the original decoration. On the pillars against the north wall of the observation gallery, several small areas were not covered by tile and enough of McPherson’s original design was still visible to make an accurate replication. 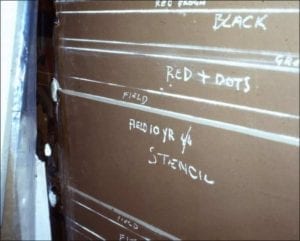 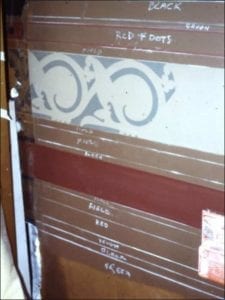 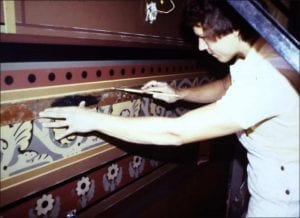 The original design of the walls contained intricate painting and stencil work. To best match the decoration of the room, the same methods McPherson and his artisans would have used were implemented. A method known as striping replicated the series of borders McPherson incorporated into his designs. 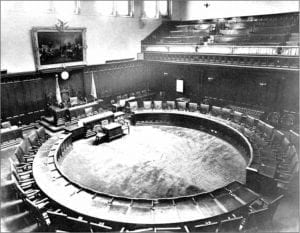 In addition to the restoring the House of Representatives Chamber, John Canning & Co. was also tasked with renovating the new home of the Senate Chamber to match the decorative style throughout the rest of the capitol building.

As it presently sits, the Senate chamber was not part of the original design. Around 1910 the state government had grown too large for all branches to fit under one roof and it became clear that architectural changes had to be made to better accommodate the growing government. Plans were made to move the Senate from its old location within the Capitol, down the hall to the space occupied by the then State Library. The final phase of reorganization involved moving the library and Supreme Court to their own buildings on Capitol Avenue. 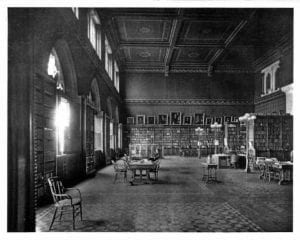 Tragically, the decorations of the old library, including the original ceiling and millwork, were demolished, leaving an underwhelming room. With little more than plain plaster walls and some wood trim, the space paled in comparison to the elaborate decorations McPherson put on display throughout the building. The room remained unadorned until the 1980’s when John Canning & Co. was tasked with creating a new design plan to bring historically-accurate decoration to the space. This ambitious plan included designing a new ceiling, creating new stencil patterns and expanding the existing millwork.

How does one set about creating a decor scheme worthy of such an architecturally significant building? The answer came by observing the many patterns and colors already seen within the building. “Borrowing” designs from around the Capitol to create a scheme for the ceiling that would not only look as if it had always been there, but would also be historically reminiscent of McPherson’s work. 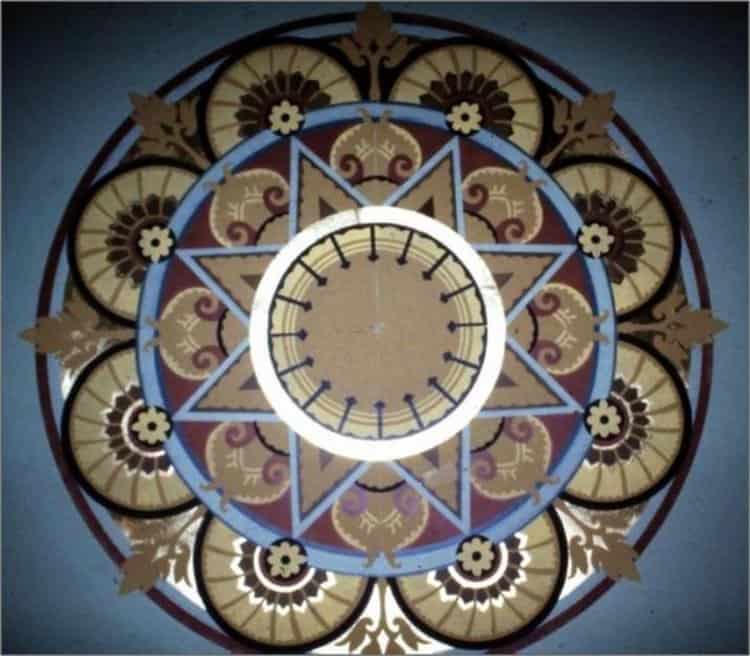 By utilizing themes already seen within the Connecticut Capitol Building, John Canning & Co. were able to overcome a number of stylistic challenges. Moreover, through the work of extensive historic and physical analysis, a cohesive and historically accurate vision was achieved.

Each space within the capitol has its own story to tell, but the close link between the current senate chamber and the judiciary room is unique. While not original work of McPherson, these spaces are testament to how meticulous attention to detail can bring about near perfect historic McPherson-esque embellishments, while adapting to modern needs and demands.

Despite working with very limited design information, the accuracy of the completed project would make McPherson proud.

Considerations, questions, and what to look for when evaluating and considering restoration contractors.