Inside The Sky Mural Restoration at Grand Central Terminal

On February 2, 1913—after 10 years, 80 million, 3 shifts per day, and up to 10,000 workers at a time—Grand Central Terminal opened to the public. In the late 1990s, after years of neglect, near demolition, and a miraculous designation as the first historic landmark under the US landmarks conservancy act, a comprehensive restoration of the station’s structural, architectural, and decorative details returned the historic landmark to its former glory. Plans were also adopted to expand the purpose of the station to include a diverse selection of restaurants and shops that would serve commuters and tourists alike.

In the fifteen years between the completion of the restoration in 1998 and the 100th anniversary celebration in 2013, myths and legends surrounding the creation, condition, and cleaning of the sky mural began to circulate, ultimately taking hold as fact in stories from such trusted sources as NBC News, NPR, and documentaries and articles produced by the History Channel. Even scripts provided to station tour guides today, as well as the current audio tour app, perpetuate these myths.

John Canning & Co. was hired to execute the conservation and restoration of the sky mural on the Grand Central Station ceiling. We joined a team of architects, conservators, engineers, and preservationists to study, analyze, test, and define the condition of the ceiling mural, the composition of the dirt covering it, the formula for the cleaning solution, the exact materials to be used, and process to be followed by our team to clean it.

While the constellations depicted in the mural are mythical, the restoration of them shouldn’t be. Here are 5 myths surrounding the Grand Central Station ceiling restoration.

5 Myths About the Restoration of the Grand Central Station Ceiling

Myth 1: The orientation of the mural’s constellations is a mistake.

The point of view for the constellations is not from earth looking up, but rather from beyond the constellations looking down toward earth through them. Designed by artist Paul Helleu, the composition was developed by J. Monroe Hewlett and executed by Charles Basing and his team. As many as 50 painters executed the mural directly onto the curved, plaster ceiling.

While we may think it more logical for the composition to have an earth-to-heavens point of view, there is simply no evidence of the mural’s orientation being a mistake - or intentional for that matter - either on the part of Mr. Helleu or of those who painted it.

The original mural was damaged beyond repair from roof leaks that destroyed the plaster. In 1944 it was decided that the mural was to be duplicated on fiberboard panels cemented to the plaster ceiling. Charles Gulbrandsen and his team were the artists responsible for the replication.

During the cleaning process, our artists uncovered notes, messages, and signatures of the workers who recreated the mural. Weddings, births, soldiers returning from war, and most notably, the end of World War II are all chronicled among the constellations and remain untouched. One of our favorites is the birth of twins noted near the Gemini constellation. 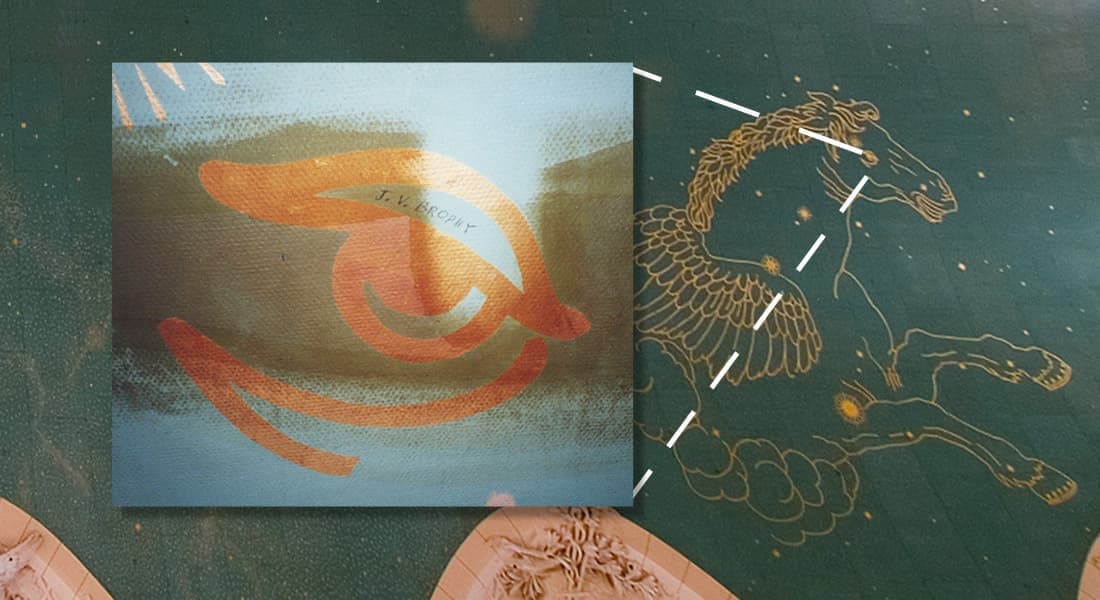 The name J.V. Brophy was carved into Pegasus’ eye during the 1945 ceiling replacement and re-discovered during our cleaning process.

Myth 2: The dirt on the ceiling and walls was a build-up of tar and nicotine from cigar and cigarette smoke. 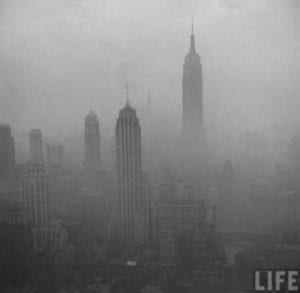 A detailed analysis of the dirt by scientists at McCrone Associates reported that the dirt and grime did not contain any nicotine or particles that could be attributed to cigar or cigarette smoke. The sometimes 2-inch thick grime was the result of decades of air pollutants - specifically car and truck exhaust, and the emissions soot and contaminants from industrial plants and apartment-building incinerators.

These pollutants, multiplied by New York’s 14.8 million residents in the 50s, made for alarming cover stories in LIFE magazine featuring NY smog. The breath-defying air in NYC and other big cities at that time led to country-wide clean air regulations beginning in 1957, the first federal Clean Air Act in 1963, and most important, mandated emission standards for automobiles, trucks, and buses beginning in 1970.

For all those years, Grand Central stood in the midst of that haze with it’s windows open to the pollutant-laden air. But the cigarette and cigar smoke from hundreds of thousands of people passing through the terminal each day did not contribute to the heavy layer of dirt and grime found on the ceiling surface 125’ above.

Myth 3: Scaffolding from the floor to the ceiling provided access to the mural. 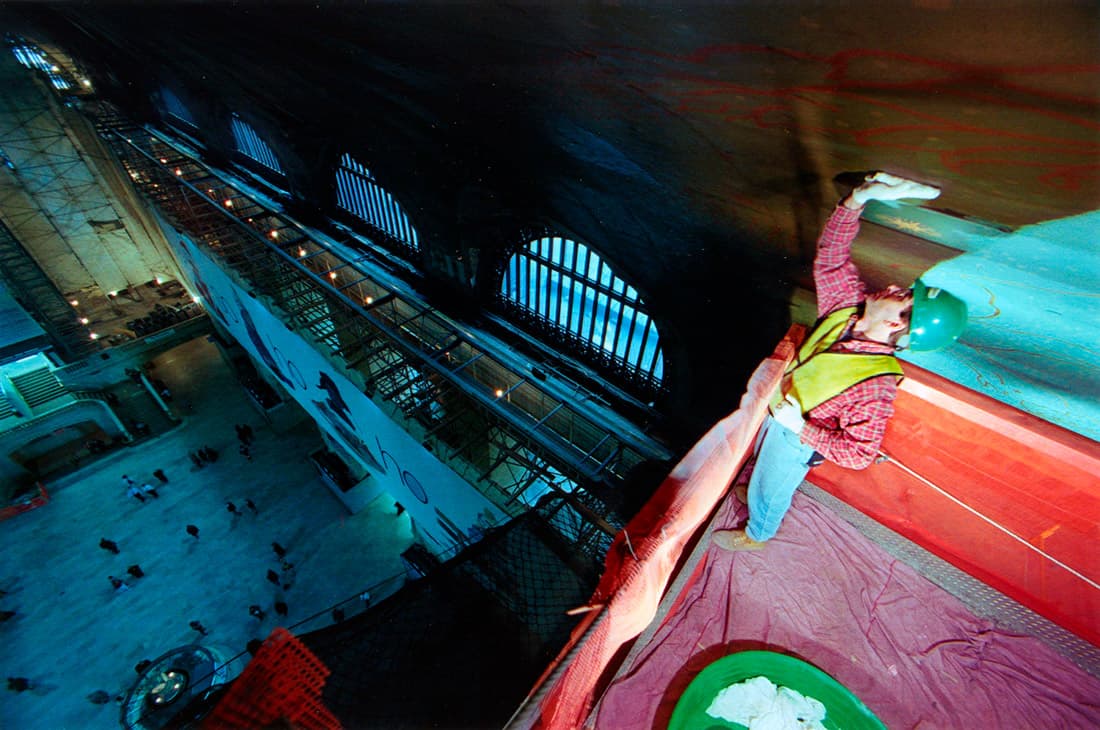 During the ceiling restoration, it was business as usual in the terminal below. The trains kept running as scheduled and 500,000 people passed through the station each day (today the average is 750,000 daily). Scaffolding throughout the main concourse would have been cost-prohibitive, impractical and hazardous.

Instead, a 30-foot wide, trussed platform, curved to match the barrel-vaulted ceiling, was built to span the 120’ wide concourse with a work surface that provided easy access to the mural. It was mounted on rails at each wall—the same kind of rails used on the tracks—supported by a single course of scaffolding on both sides of the concourse.

The John Canning & Co. team worked alongside other contractors, carefully coordinating the completion of their tasks and the movement of the platform to each new section.

Myth 4: A common household cleaner, or soap and water, applied with cheesecloth was used to clean the mural.

It’s true that a commercially available cleaner was initially specified for the cleaning of the ceiling. However, once the mural could be accessed, tests on the ceiling showed the cleaner to be too aggressive, harming the paint and decoration in addition to removing the dirt.

Our professional conservators developed a series of tests using peer reviewed fine-art conservation solutions commonly used to clean artwork found in public spaces. The final solution was a combination of systems that were used successfully on the Boston Public Library staircase murals, and the priceless Sistine Ceiling paintings.

The cleaning solution was specifically formulated to address the exact composition of the dirt to be removed, and the composition of the paint and gold-leaf surface beneath it. The final solution was pH neutral, allowing it to remove the dirt completely without harming the decorated surface beneath. In fact, the cleaning solution left no residue behind, making additional rinsing unnecessary.

Here’s a look at the cleaning process: 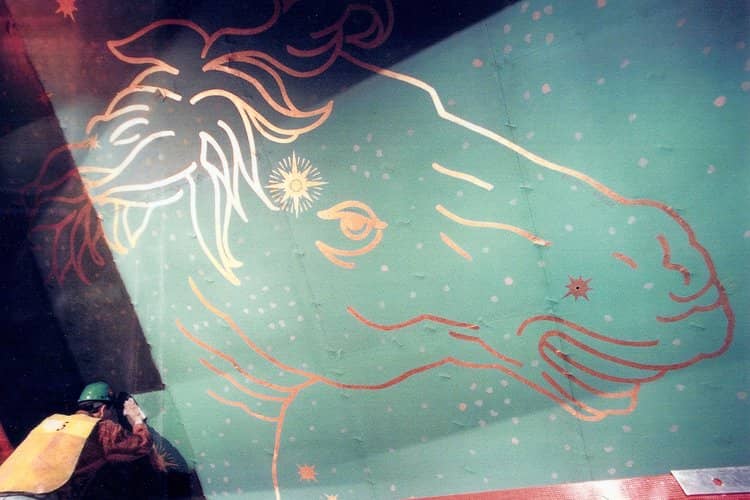 Myth 5: The small patches of dirt on the ceiling and cornice show “before” and “after” cleaning conditions 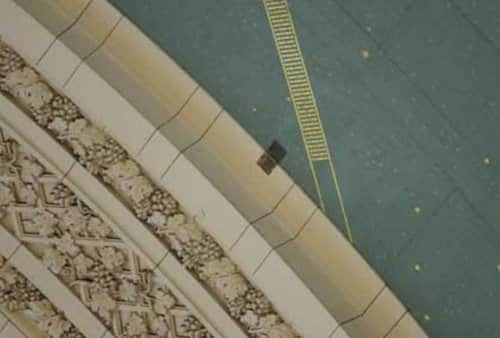 The untouched patches do provide a before and after illustration for viewers, but that is not their primary purpose.

In conservation, it is standard practice to preserve evidence of conditions for historic documentation and to provide the opportunity for future study. Those patches provide the complete environmental history of the building’s interior from 1944, when the mural was recreated, to 1998, when the restoration of the interior was completed.

If the controversy continues regarding the existence of nicotine and tar from cigarette smoke being the culprit for the discoloration and soil, those squares exist to provide the answers now and in the future.

John Canning & Co. is proud to have played an integral role in the award-winning restoration of Grand Central Station’s iconic ceiling.

In our forty-five year history, we have had the privilege of working on the most iconic US landmark buildings. The Sky Mural restoration at Grand Central Terminal is perhaps the quintessential example of conservation in its purest form. By fine-tuning conservation-quality cleaning agents we were able to methodically clean the mural and remove the decades of dirt without harming the mural.

Over two decades later, the Sky Mural brightly crowns Grand Central Terminal’s concourse—a Beaux-Arts cathedral for commuters; the biggest and busiest terminal in the world; one of New York City’s most important landmarks; and the 6th most visited tourist attraction in the world with more than 21.5 million visitors annually.