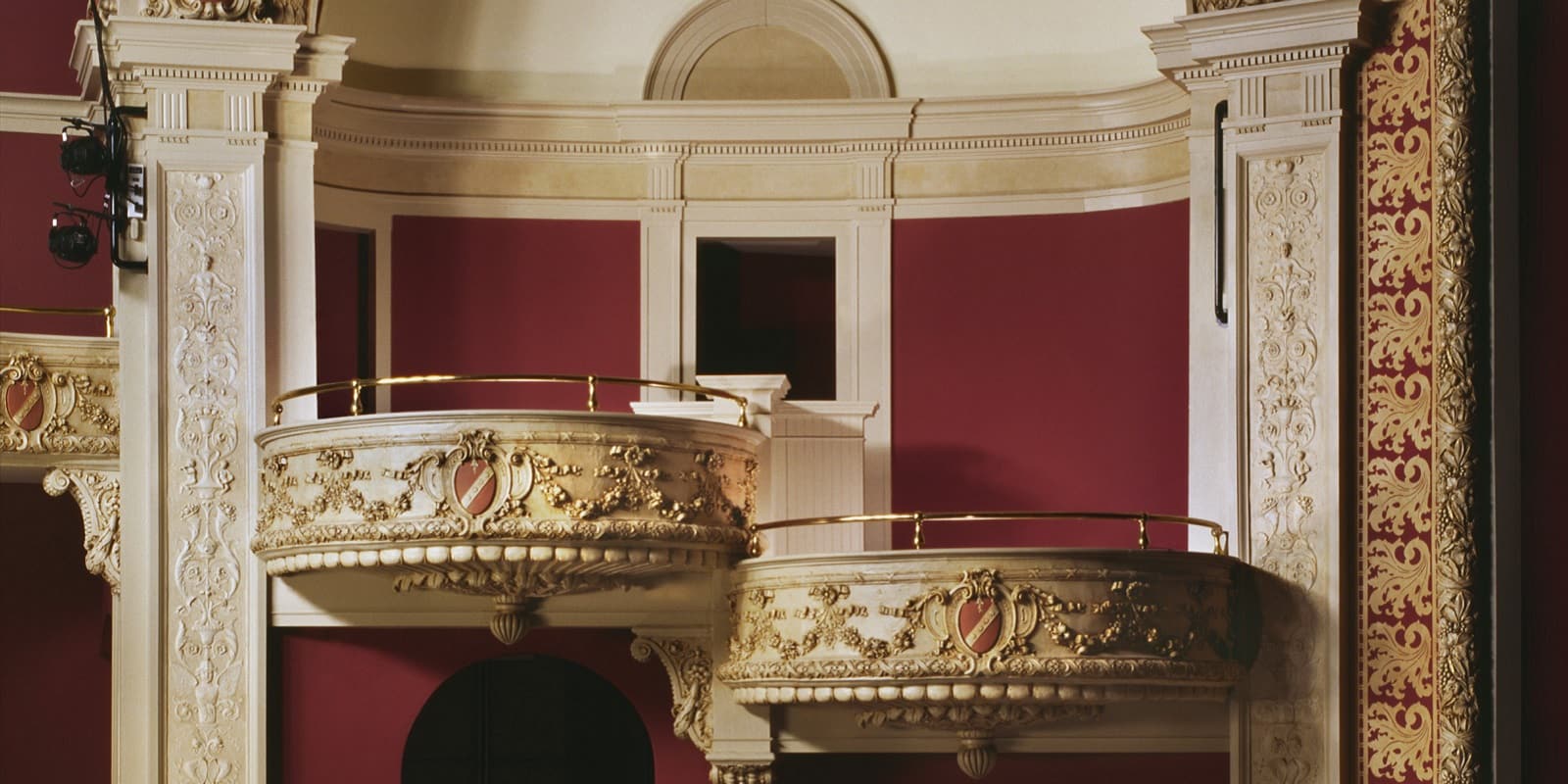 Historically, builders and architects performed ornamental plasterwork in two ways: accomplished on the site or through cast in molds in the studio for installation on site. Ornamental plaster can truly transform a space, and John Canning & Co. have mastered the art of creating beautiful designs or matching the traditional techniques and processes.  There are many historical theaters that the John Canning Company has worked on utilizing ornamental plasterwork to restore and beautify these important community palaces. They have also developed techniques and materials to stabilize and preserve existing plaster in a cost-effective way that has been brought to all regions of the country.

The Colonial Theater in Pittsfield, Massachusetts, built by Joseph McArthur Vance & J.B. McElfatrick, is an American Colonial style theater. It opened on September 28th, 1903, with a production of Robin Hood. Early on, the Colonial theater received work to enhance the plasterwork and rich finishes. By the end of 1912, it had state-of-the-art theatrical technology, including a General Electric Company switchboard. Over the next few decades, the Colonial Theater struggled, closing in 1934 due to the Great Depression and closing again in 1937 after a failed reopening with a new marquee, projection room, and two retail stores for movies and community performances. By 1952, George and Sally Ruth Miller bought the space, which was no longer a functioning theater. The Miller family did their best to preserve and conceal the balconies, architectural details, and decorative integrity until it was opened again to serve the community. By the late 1990s, the theater began to host tours for the public and entertain the community. By the 2000s, The Colonial Theater Association bought the theater and began removing the walls and ceilings to analyze the layers of paint from its 1903 opening. By 2006, the theater reopened to the public after months of restoration. John Canning & Co. worked on the Colonial Theater at a point performing plasterwork restoration, preservation and stabilization throughout the main auditorium and public spaces. The work included the reattachment of historic plaster and fabrication of missing ornament using both mechanical and plaster consolidation methods. Audiences were receptive to the new custom plasterwork and decorative detailing. Today, the Colonial still helps the community as an entertainment center, as well as a learning house for students of all ages. 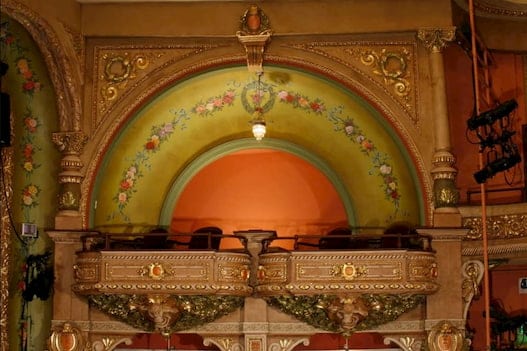 The Ulster Performing Arts Center, the Broadway Theater, originally opened as a movie palace and vaudeville house in 1927 and was designed by Douglas P. Hall. While it is a movie palace, it is also an untouched pre-World War II artifact left in the city and one of only three in the area. Douglas Hall designed the interior with a proscenium arch with alternating octagons, foliated candelabras, and other foliate motifs. It also has Corinthian pilasters and engaged columns around the wall. Likewise, similar decoration continues into the ceiling dome with decorated grillwork, recessed panels, anthemion leaves, and other foliate moldings. However, the plaster walls are less decorated. Meanwhile, the lobby matches the themes of the auditorium and Aztec motifs. By 1947, the Walter Reade Organization bought the theater, becoming the first-run movie house with the new name, Community Theater. Unfortunately, by 1977 the competing nature of the nearby business and entertaining spaces caused the theater to close and slated for demolition. However, three dedicated co-partners, Norm Rafalowsky, Helen Newcombe, and C. Lincoln Christensen, saved the theater. By 1995, a nonprofit raised 1.7 million dollars for a renovation that would finish in 2002, in time for its 75th anniversary. By 2006, another restoration plan went underway. Later in 2017 John Canning & Co. was selected to assist with repairing, stabilizing and reinstating of water-damaged plaster. The work also included plaster patching with traditional plaster and ornamental plaster replication.  Areas of loose plaster that was salvaged was stabilized using plaster consolidants, such as Rhoplex MC-76 and Rhoplex 1950.  Of note, this plaster open-source consolidation system was developed by building conservation pioneer, Morgan W. Phillips. The Ulster Performing Arts Center currently presents diverse and year-round productions and is the largest proscenium between Manhattan and Albany. 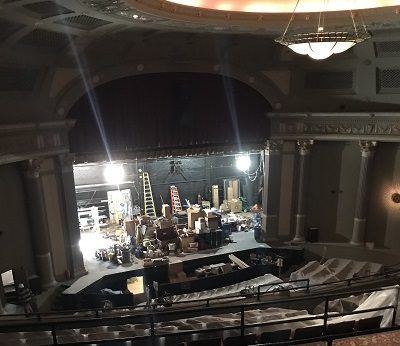 Built in 1905 by Joseph McArthur Vance and a coalition of business people, The Mahaiwe Performing Arts Center serves the town’s primary performance space. Mahaiwe means “the place downstream” from the Housatonic River and encompasses the Mahaiwe Block. It is a three-story building with long facades to Main and Castle streets, has marble trim elements, and pressed metal entablature on the exterior. It also has two storefronts with an art-deco entrance, a large two-story round arch opening, and a beautiful marquee with the theater’s name in illuminated letters. It originally opened for the theater crowd until silent films came around, and by the early 30s, the theater switched to focus on movies. Despite being the only theater to serve the community, it faced many demolition threats and redevelopment when a cinema chain bought the theater in the late 80s. However, in 1995 the Great Barrington’s Downtown Historic District gained access to the Mahaiwe to protect it and put it under a 2003 renovation. John Canning & Co. was brought in as a specialty contractor to investigate and restore the original decorative treatments and motifs. The Canning team exposed the original decorative paint scheme by creating paint exposures (a.k.a window reveals), repaired and stabilized ornamental plaster, and restored the initial decorative treatments. Today it still serves the Barrington area and is recognized as a U.S. National Register of Historic Places. 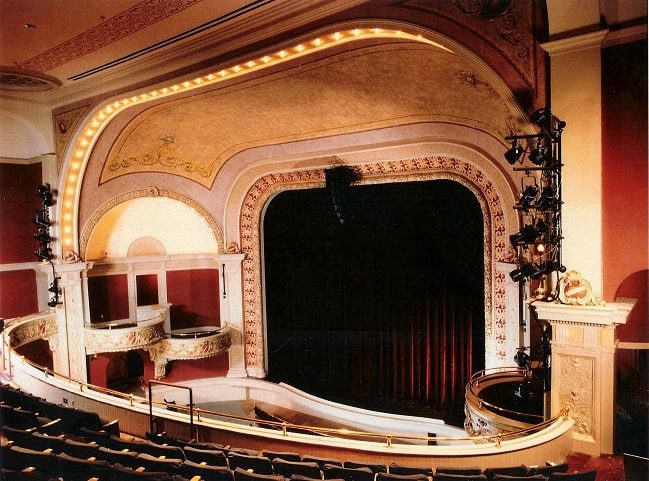 The Stadium Theater has the Adamesque style, built by Perry and Whipple in 1926 as a vaudeville house. It contains a theater, offices, and retail spaces. Initially, Mrs. Norbert Champeau, a widow who expressed interest in the space, funded the project until Arthur I. Darman, an industrialist, took over. It currently sits as one of the most elaborately decorated spaces in Woonsocket and gets its name from its stadium-style seating. Unfortunately, the building began to decline and decay until the mayor tried to save the theater with a 3-million-dollar renovation, and the theater opened again in 2001. John Canning & Co. was the restoration consultant and specialty contractor for the restoration of decoration and decorative paintwork. In addition, they coordinated all work and trades on the interior restoration. Before the restoration the theater presented with a beige interior devoid of decoration and crumbling ornamental plaster. Through Canning’s historical research, mechanical exposures, scientific analysis, and interpretation, they were able to recreate the original decoration with figurative murals, floral abstracts, medallions, and more. Likewise, a new mural was created for the foyer, and all plaster was stabilized, consolidated, and repaired. Today, the Historic National Landmark Stadium Theater thrives, serving the community and giving everyone a great seat to see entertainment. 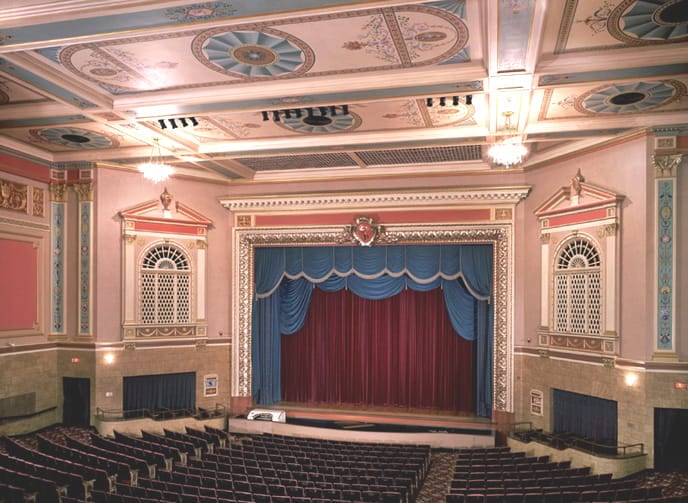 The Philadelphia Academy of Music is the oldest theater on this list, built-in in 1855 by Napoleon LeBrun & Gustavus Runge in the Renaissance style. It opened in 1857 with an inaugural ball that began on January 26th. It is the oldest opera house in the United States that still hosts ball concerts and other entertainment. It is known as the “Grand Old Lady of Locust Street” and was home to the Philadelphia Orchestra from 1900 to 2001, which became one of the world’s most outstanding and legendary Philadelphia Sound. Before its opening, an architectural competition began for the Academy’s design, where Napoleon LeBrun and Gustavus Runge won and used a German style, now known as Rundbogenstil, for the exterior. Architects also designed a relatively plain brick and brownstone exterior that could be clad in marble to keep the cost down for the theater’s interior. The interior is considered an early example of American Baroque Revival architecture, with a sizeable crystal chandelier in the center. It used to require 12 people to work on it and take four hours to lower by hand. The proscenium is a bas-relief bust of Mozart, and on the cornice above are the figures of Poetry and Music on the left and right, respectfully. The other elaborate carvings and gilded wood sculpture decorations are from Charles Bushor and Joseph A. Bailly, while Karl Hermann Schmolze is responsible for the ceiling murals of allegorical figures. The front of the stage is draped in crimson fabric with golden fringe, ropes, tassels, and more. John Canning & Co. worked on the restoration of the Music Ballroom at the Academy of Music.  This work included consulting for historic finish exposures, paint analysis and plaster analysis. The restoration and conservation work included ornamental plaster fabrication and repair, woodwork finishes restoration, decorative painting, trompe l’oeil, and gilding.  For this work, Canning referenced an 1860 photo to replicate the original design scheme of the ballroom.  This National Historic Landmark continues to be the “Grand Old Lady of Locust Street” continuing to a beautiful hosting spot for entertainment for all to enjoy. 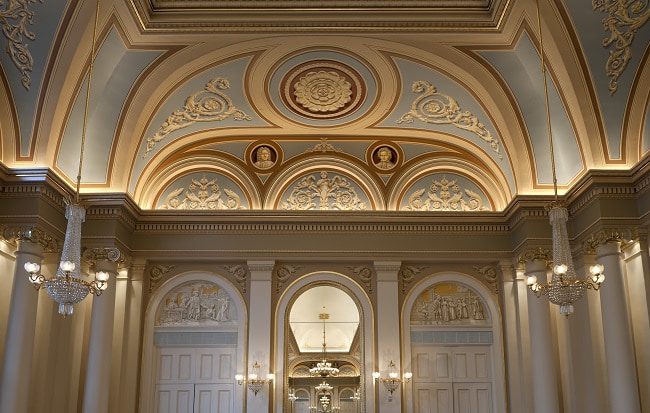 These historic theaters and many others, would not be beautiful landmark pieces in their community if it were not for their architects’ stunning ornamental plaster and the restoration efforts of many.  They are a moment from history that still functions in society today and are worth a visit. 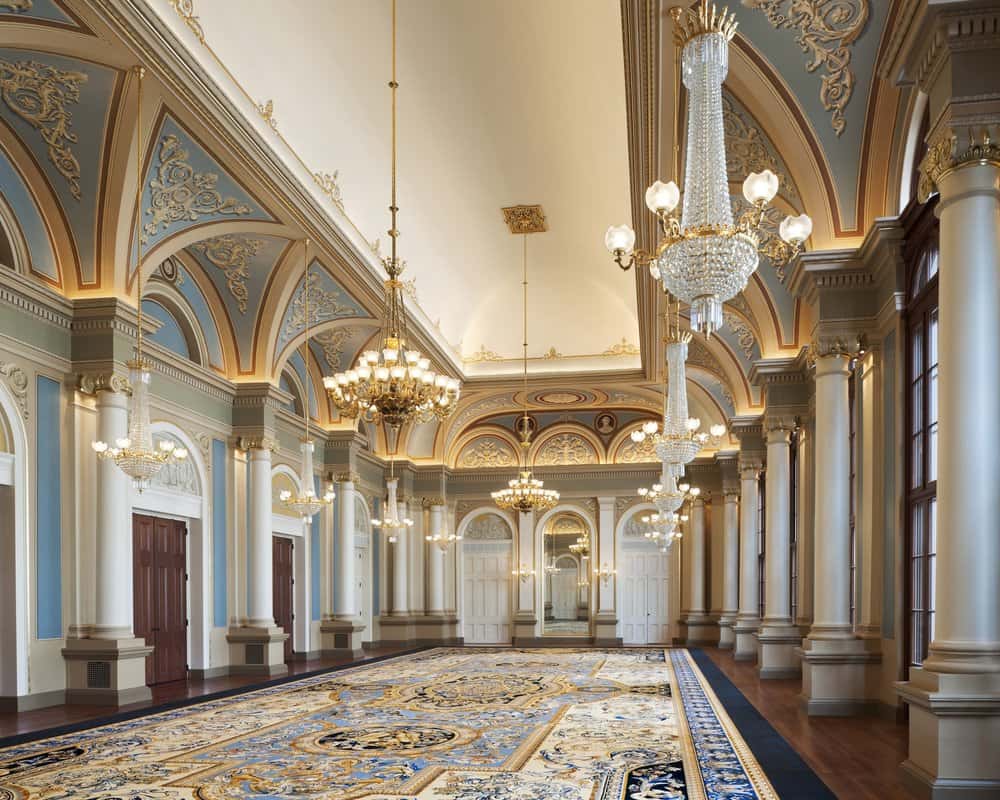 The Philadelphia Academy of Music restoration involved analysis of up to 16 layers of paint aggressive exposure methods to reveal faintly ghosted patterns.

Our team of artisans were the restoration consultants and specialty contractors for the historic Stadium Theatre decoration and finishes. 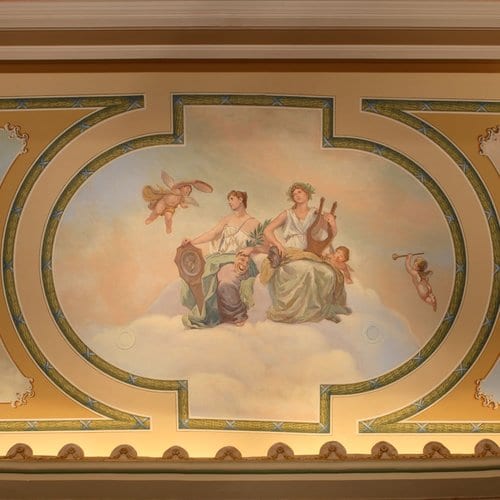 Our conservation team restored the plasterwork throughout the Colonial Theatre’s auditorium and public spaces, including casting ornamental plaster. 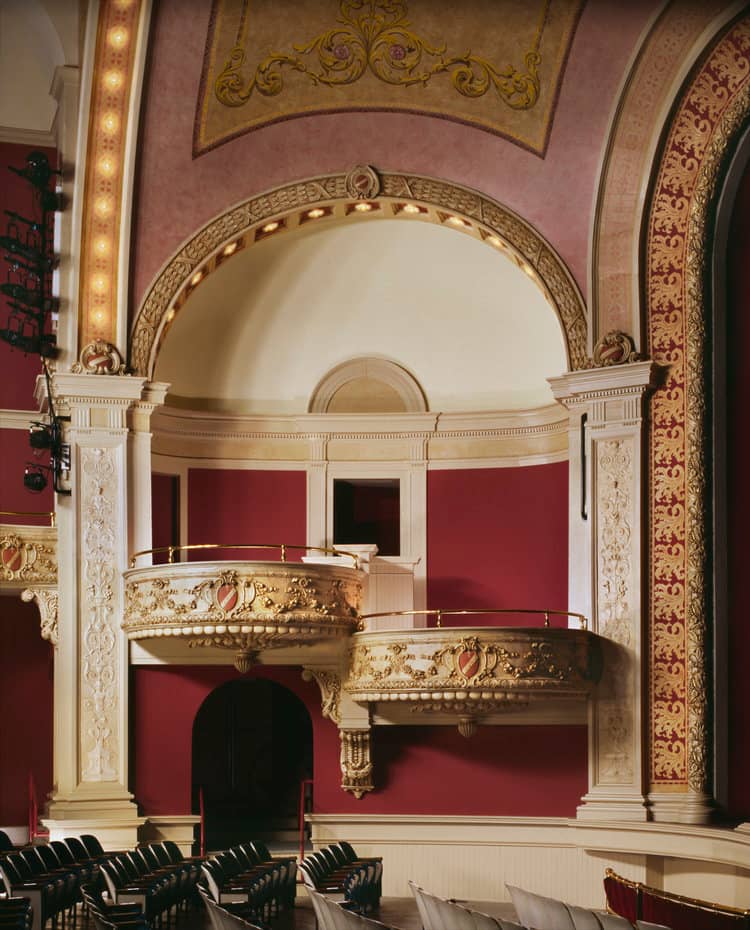 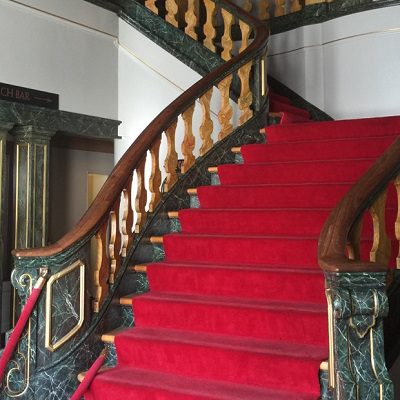 4 Steps for Maintaining a Historic Theatre 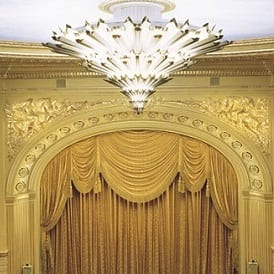 Historic Theatre Restoration- How To Make It A Reality 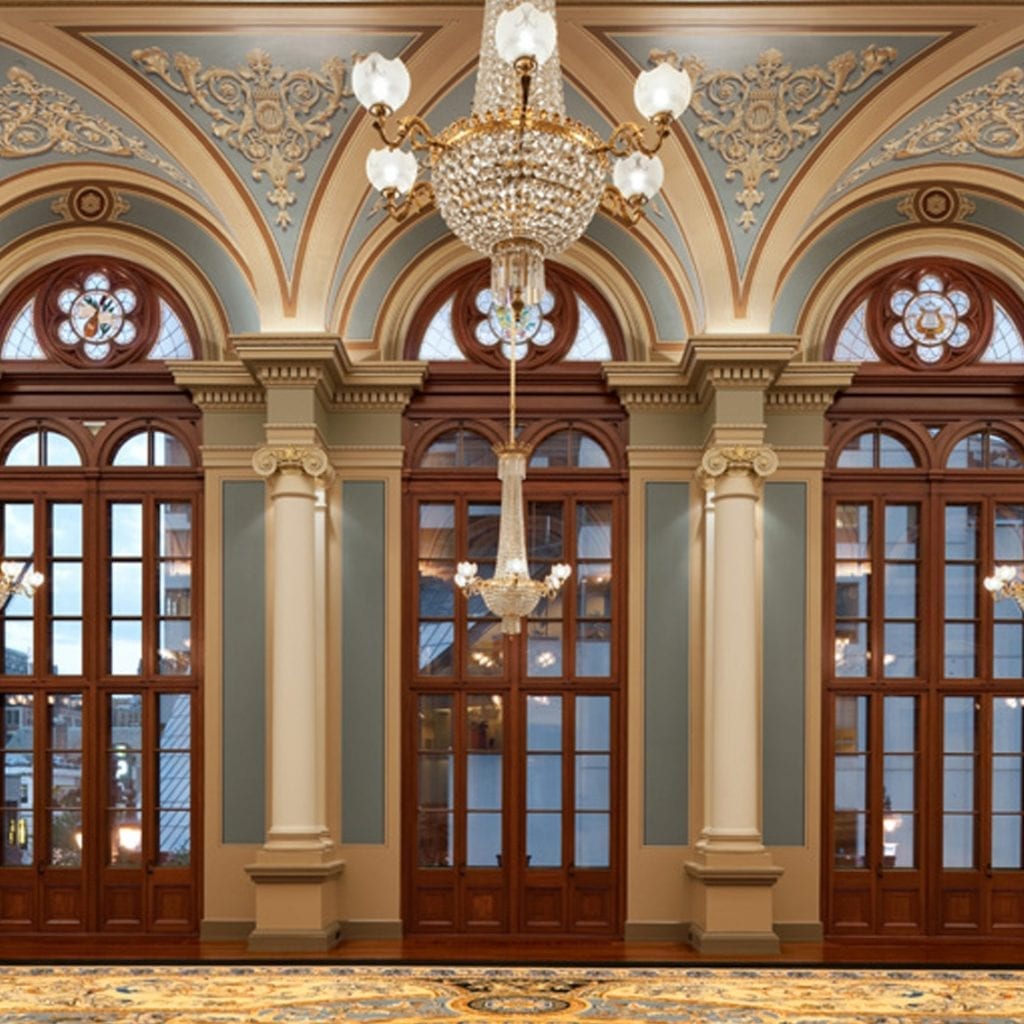 Restoring Illusions of Grandeur in the Philadelphia Academy of Music Ballroom 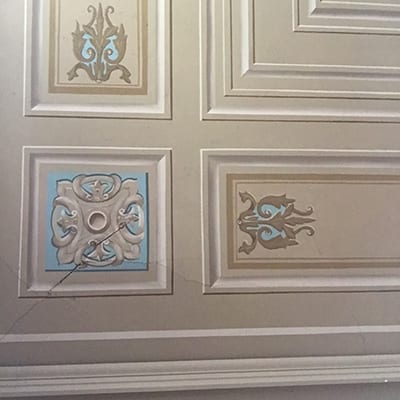 Everything You Need To Know About Historic Plaster Consolidation 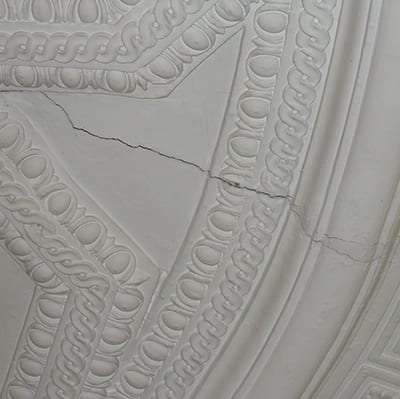 How to Decide Whether to Repair or Replace Ornamental Plaster 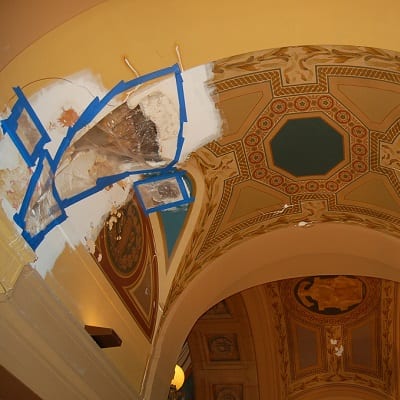 How to Assess Plasterwork in Historic Structures 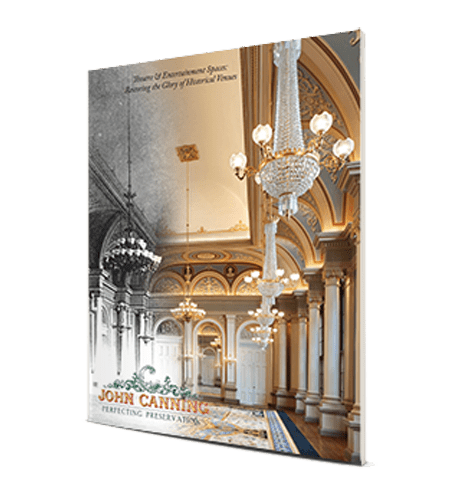 Check Out Our Theatre Guide