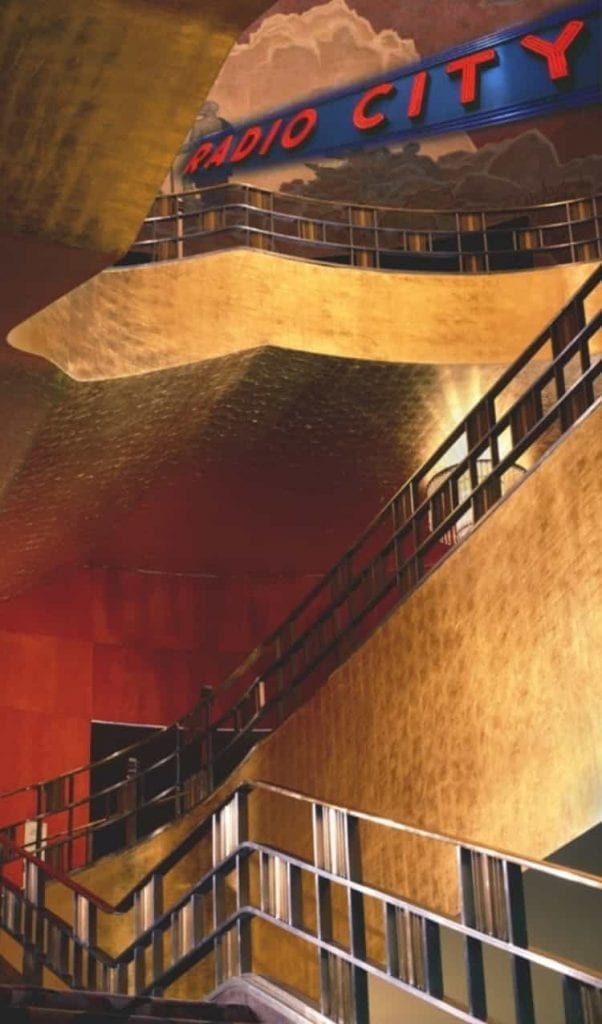 Amidst the glitz and glam of the roaring 20’s and early 30’s, oil tycoon John D. Rockefeller was in the process of constructing a 22-acre commercial complex unlike any the world had ever seen. The 19 commercial buildings constructed were the pinnacle of opulence and success, but one building in particular, Radio City Music Hall, surpasses them all. With tens of thousands of square-feet adorned in Dutch metal, the building serves as a glittering gem, which epitomizes the height of the Art Deco movement.

Designed by the famed Donald Deskey, Radio City was intended to be a place so spectacular the only thing that could possibly surpass the brilliance of the design would be the shows themselves. Deskey achieved this vision by covering walls, ceilings, and doors in gold, aluminum, and Dutch metal. His design created a striking imbalance between white and yellow metal, where one was more prominent than the other. The interchangeable use of metal color on numerous surfaces was made even more dramatic by using mirrors and thick curtains in the grand foyer.

Copper leaf was also introduced in the men’s lounge, and takes its cues from elsewhere in the building. The dramatic relationship between yellow and white plays out across 90,000 square-feet of gilded surfaces, which makes it one of the largest architectural gilding projects to date. Each surface required hand application of five inch square metal leafs, which then needed to be coated with layers of glaze to achieve the final product.

Every aspect of Radio City Music Hall was done on a scale so enormous, no other project could possibly eclipse it. In no place is this better illustrated than the grand lobby. Patrons are instantly struck by the curved staircase, which wraps though the lobby without any visible supports. Both the sides and underside of the staircase are gilt in Dutch metal, simulating gold leaf, but there is a specific grid pattern to it.

The effect of the glittering grand staircase is further punctuated with a dramatic, highly stylized landscape scene. Further framing the space are curtains that run from floor to ceiling and mirrors with a gold wash. The theme of gold and white is further displayed in the theater itself.

Designed to resemble a setting sun, the stage is elegantly framed in bright tones and vibrantly colored stage curtains. The battle between form and function has no greater resolution than in the coral staircase. Running along the perimeter of the concert hall, it is covered entirely in Dutch metal and serves, in part, to further the sun burst effect Deskey was trying to achieve in the space.

The coral staircase, however, is just as much an artistic expression as it is an architectural feature, essential to the productions that take place. Completely enveloping the audience, the coral staircase is often where the show begins. Most famously, at the opening of the Christmas Spectacular, the Rockettes dance down the staircase and continue to use it as a means to interact with the audience throughout the show.

Perhaps more dramatic than the shows, is the life story of the man charged with producing them. Samuel Lionel Rothafel, or “Roxy” as he was known, was the producer and main visionary, whose foresight, planning, and talent helped to make the productions at Radio City Music Hall beyond all compare. Roxy worked relentlessly to stage the inaugural show. Tragically, since he so significantly over-taxed himself, he died on opening night.

Roxy left an indelible mark, not only in establishing a precedent of magnitude for the shows, but also physically. Tucked away high above the theater is a private apartment not regularly open to the public. In order to thank Roxy for all of his work, Rockefeller built Roxy this stunning apartment, replete with gilded ceilings and hand-crafted furniture. 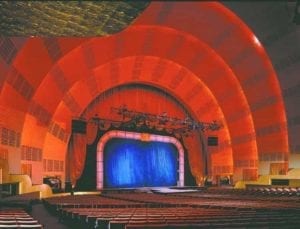 In 1998, John Canning & Co. played an integral role in the award-winning restoration of Radio City Music Hall and its opulent architectural and decorative elements.

Beyond the shear scope of the project, restoring the gilding on the grand foyer staircase produced a number of challenges for David Riccio and his team. When it came time to apply the small five inch square pieces of gold, they had to align perfectly. Any deviation to the pattern would be instantly noticeable, ruining the incredible effect. To continue the linear design along the curved portion, each piece of gold leaf had to be cut and applied in a fashion in keeping with the established lines of the space.

The challenges overcome throughout the project were monumental. The scope of the space is unparalleled, and to truly put John Canning & Co. to the test, the entire restoration needed to be completed in just eleven weeks. Conducting perhaps the largest gilding project ever on just a short timeline was not easy. It was further complicated by having to do it in the middle of Midtown Manhattan, where navigating some of the busiest traffic in the world was a daily struggle.

Since Radio City Music Hall is a registered landmark, any changes that were made required approval from a board of governors. Fortunately, David and the John Canning & Co. team were able to develop a productive relationship with the committee overseeing the project, as well as the union overseeing the workers. Through constant problem solving and troubleshooting, John Canning & Co. was able to execute one of the largest gilding projects ever attempted and helped preserve one of America’s most iconic landmarks.

A Guide To Restoring the Glory of Historical Theatre & Entertainment Venues